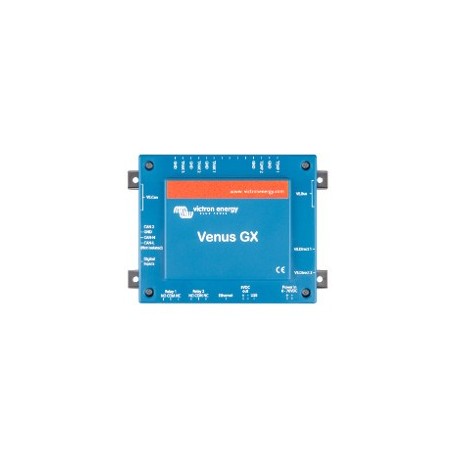 The Venus GX provides intuitive control and monitoring. It has the same functionality as the Colour Control GX, with a few extras:

- lower cost, mainly because it has no display or buttons
- 3 tank sender inputs
- 2 temperature inputs

A lot of the hardware is the same as CCGX, and it runs the same software, Victron Energy Venus OS. Their software therefore shares the same version numbering, and new versions are released at the same time for both devices.

Because the Venus GX has no display nor any buttons, it works slightly differently than the CCGX. The way to access the device for setting up, as well as monitoring, is via Remote Console, ether via VRM, via the built-in WiFi Access Point, or on the local LAN/WiFi network.

For installations with Pylon, BYD and LG Chem, you will need x1 RJ45-S-FTP-5M per Colour Control for communication between the Colour Control GX and the batteries

Send us your question

Be the first to ask a question about this product!

25 other products in the same category: